The European Commission is set to propose investing almost €9.2bn (£8bn) in a massive rollout of super-fast broadband infrastructure and services across the European Union.

The plan is partly aimed at stimulating further investment in rural broadband.

It is hoped the initiative will also help to create a single market for digital public services.

The Commission has already set targets for improving the speed of home internet connections across the region.

It aims to get all European households on at least 30 megabits per second (Mbps) by 2020, with half the population enjoying more than 100Mbps, so as to make the continent more competitive and productive.

The BBC understands that the EU’s executive body will propose the funding, which would be invested between 2014 and 2020, on Wednesday.

The plan would have to be approved by the European Parliament and the EU’s Council of Ministers if it were to become reality.

“Europe needs these fast broadband networks to allow its economy to become more competitive in the future, and so create more jobs and prosperity,” EU sources said.

“This money would stimulate much greater investment of private and other public money. Each euro [invested by the Commission] would give rise to a further six to 15 euros more.”

At least €7bn of the investment would go to building high-speed broadband networks, with the funding mostly in the form of debt instruments and equity.

The hope is that giving infrastructure projects credibility in this way would encourage the private sector, as well as local and national governments, to invest at least a further €50bn in the rollout. 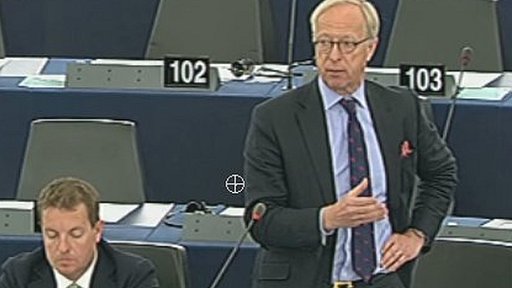 European Parliament debate on fast broadband from 9 May 2011

The remainder of the Commission’s funding would be parcelled out in grants for projects that could help create a single European market for broadband-based services such as e-health, cybersecurity and intelligent energy networks.

The money would come from a new fund called the Connecting Europe Facility (CEF). This proposed fund would also be used for new transport and energy projects, with the Commission and the European Investment Bank absorbing risk and boosting the projects’ credit ratings.

Part of the plan is for the CEF to pressure established telecommunications companies into investing more in their own networks, as they would not be the only ones able to bid for funding.

New players such as water, sewage and electricity utility companies would also be encouraged to enter the broadband game with CEF backing, as would construction firms, cooperatives and public authorities.

A particular objective is to get more money invested in rural broadband. Left to their own devices, telecoms companies often invest less in such areas because they are not as profitable as more densely-populated towns and cities.

While the Commission’s digital agenda is largely about getting citizens on fast connections, it also contains plans to make electronic public services available equally across the continent.

Under the proposals to be unveiled on Wednesday, grants could go to cross-border e-health and electronic procurement services, smart energy networks and coordinated efforts to take down online child pornography.

Other examples of projects that would meet the Commission’s criteria include pan-EU electronic identity schemes, systems that would encourage access to European culture, and multilingual public information services.

The Commission also hopes its plan would immediately create hundreds of thousands of jobs in the construction and telecoms equipment industries, as efforts to install fibre optic cable networks increase with the additional backing.

ETSI to transform the standards development landscape with...