Latest news:>Orange Selects Amdocs as the Monetization Engine for their 5G Experimental Network of the Future

Latest news:Nokia and African Telecommunications Union (ATU) to speed up digital transformation and the knowledge economy in Africa Latest news: Accedo One Adds Multiple DRM Support to its Marketplace

(New York, NY – March 3, 2015) – The World Teleport Association (WTA) today announced that its Board of Directors has elected James Trevelyan, Sales Director at Arqiva Satellite & Media, as its new Chairman effective April 1.  Mr. Trevelyan replaces M. Brett Belinsky, Managing Director of EMEA at Encompass Digital Media, who has served as Chairman of the Board since 2011 and is stepping down from the Board at the end of his final term.

“Five years ago,” said Mr. Belinsky, “we set off on a journey of advocacy and I’m thrilled that James has stepped up to lead the Board as it moves forward. I have come to admire his integrity and passion over the years and I am confident that under his guidance the WTA will continue to encourage independence and, more importantly, ensure that the Board is always focused on supporting the interests of the broader constituency.”

During Mr. Belinsky’s tenure as Chairman, WTA has introduced the Satellite Operator Benchmarks report as well as a collection of other research programs that provide its members with valuable guidance on business and technology management and helps them speak with one voice on important business and market issues.  As a result, the association’s membership has grown 21% to more than 120 companies and 1,000+ individuals, and its revenue base has expanded 19%. 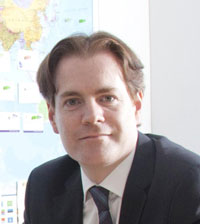 Mr. Trevelyan’s career in the satellite industry began in 2001, when he joined Kingston inmedia, now Arqiva.  Three years later he became a member of the leadership team charged with growing the enterprise services side of a predominately satellite broadcast business.  He built up a sales and technical team, which grew annual revenues organically from $8m to in excess of $55m. He was involved in the acquisition and subsequent integration of the BT Satellite business in 2006.

“I’m honoured to have been given the role of Chairman of the WTA,” said Mr. Trevelyan. “It’s an exciting time to be working in this industry with today’s changing technology, operations and business models creating new, but exciting challenges to overcome. As Chairman, I will continue to build on the fantastic work Brett has achieved and drive forward the WTA members’ mission and goals.”

Today Mr. Trevelyan is accountable for the enterprise business globally as well as the satellite broadcast business across the MENA region. He manages sales, technical, product, project and service implementation including the procurement and management of ~450MHz related to these business areas.

Mr. Trevelyan has served as a member of WTA’s Board since 2012. In his earlier career he held various sales and marketing roles at Nortel Networks, Lexmark International and IBM.   He holds an honours degree in International Marketing and Languages from Strathclyde Business School as well as diplomas from L’ESSCA in France and Dortmund University in Germany.

About World Teleport Association
Since 1985, the World Teleport Association (www.worldteleport.org) has focused on improving the business of satellite communications from the ground up. At the core of its membership are the world’s most innovative operators of teleports, from independents to multinationals, niche service providers to global carriers. WTA is dedicated to advocating for the interests of teleport operators in the global telecommunications market and promoting excellence in teleport business practice, technology and operations.

Accedo One Adds Multiple DRM Support to its...